The Paper Magician Series is a traditionally published young adult fantasy fiction trilogy, sort of. The Plastic Magician is part of the series and world, but not part of the trilogy. If young adult fantasy fiction had a female chic-flick sub-genre (please don’t!), then this would be included as well as The Winternight Trilogy, Etania’s Worth, All things Now Living, The Lark and the Wren, and Astray  This trilogy  comprises of The Paper Magician, The Glass Magician, and The Master Magician.

First of all, I want to say that I did enjoy reading these books for the most part. Even though I do have some serious criticisms, I would still recommend these book for those who like this kind of story. I don’t post negative reviews on my blog. I email the author instead if I can’t recommend a book. Even so, I do post my complaints as well as complements so that readers know what they are getting. With this series, I had expected more since it wasn’t indie and presumably had many more eyes and hands working on it. Not that it would have gotten a pass if it had been indie, but I know that it is often harder for indie authors to put out a polished product. This series read like many indie books in terms of the complexity of plot and character. Technically, the spelling and grammar was perfect. 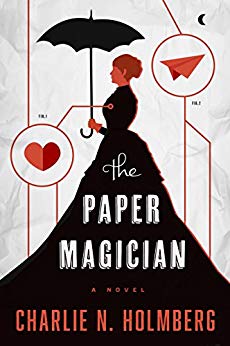 The Paper Magician starts with the nineteen-year-old Ceony Twill being forced into an apprenticeship with the Paper Magician Emery Thane. She had wanted to study a different form of magic, but because there is a lack of paper magicians in Victorian England, she is told she gets paper or nothing. A romance begins to flourish until Emories heart is ripped out of his chest and stolen by his ex-wife. Ceony set on an adventure to recover the heart before the paper magician dies.

I love the idea of the magic system based on man-made materials. I also love the gradual development of the love story. Mrs. Charlie is an extremely detailed write and everything in the book is vivid in your imagination. It is truly fun to read. Unfortunately, I had some problems with this book as well.

First, it is highly unlikely a young single woman in Victorian England would ever have been forced to live with an older man (30 years old… older than her I mean), even if he is her teacher, completely alone… no servants, no neighbors, nobody else. I can imagine that even happening in our liberal society today with the prominent “Me Too” movement. There should have been servants at least. An elderly housekeeper or Butler would have been an adequate chaperon. Secondly, the limits of this magic system is not adequately explained. How is the villain able to just walk by the wards on the house to steal Magician Thane’s heart? In the rest of the books, the boar of magicians put a lot of faith in these wards to keep the other villains away. This really needs to be explained. And finally, I think way too much time is spent in this book (about half of the novel) on a tour of the memories held in this heart. I started skimming parts.

Still, The Paper Magician is the best of the three books in the trilogy and was a fun read.

The Glass Magician starts out a few weeks later after The Paper Magician ends. We see that the romance has progressed, but then suddenly in the book, it is questioned and doubted for no apparent reason. The friends of the villain in the first book are now after Ceony and for some reason, none of the magicians, including Emery Thane, thinks she should be involved in meetings about her own safety or that of her family. So, of course, as in many books of this type, she takes matters into her own hands and screws everything up before fixing it all.

If you can’t tell, the plot of this novel bugged me because it was very predictable. How she messes things up and how she fixes them is not completely transparent, so you may enjoy this particular trope. Again, the descriptions are vivid and we learn a bit about glass magic and other kinds of magic. The strong part of this book was the end of the book in which Ceony fixes everything. Honestly, the best scene in the trilogy with a great reveal.

The characters become a little more rounded out, but not by much. Many of the same issues that were dealt with in the first book are rehashed here. The main nice part is that you do get to see Emery Thane acting heroically. Some reviews think this book was stronger than the first book. The plot is a little more complicated with two villains who have different motives. For me, this novel had more plot holes and inconsistency with the magic system. Some people would be bothered by this while others wouldn’t care as long as the love story was adequately romantic. Well, the love story does progress nicely, though a bit inconsistently as well. 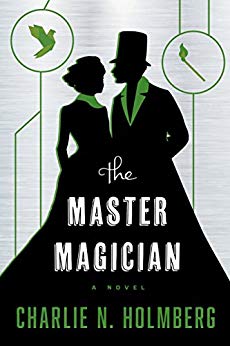 The last book, The Master Magician, jumps ahead a year and a half to went Ceony needs to test to become a full magician. Since the love story has progressed to a series of sexual near misses, Emery Thane thinks she should test with a magician who hates him. During this time, the one remaining living villian escapes a prison transfer, and Ceony becomes obsessed with tracking him down.

Honestly, I read the first third of this book and then skimmed to the climax before reading the rest. I don’t feel like I missed much. The logic of having someone else test Ceony makes sense, but some of the conflicts between Ceony and many other characters just seemed contrived. Tension is created in the love story by having both Ceony and Emery’s love letters go missing, making both parties wonder if the other has turned against them. Much of the conflict in the plot was rehashing old issues yet again with another bout of trying to leave Ceony out of the discussions concerning her own safety. The highlight of the book is the climax in which both Ceony and Emery fight together and show off their full abilities. The final resolution to the love story was nice, but by the time I got there, it was really not a surprise. This last book would have been much stronger had I not felt like so many things were contrived to create a final conflict. I think it would have been better to have edited down The Glass Magician and this one to create a single volume or save the villain in this book for only this book instead of having him captured by Emery in the last book.  I don’t know what would be better.

Overall, I did enjoy the books as a fun and very light read. Be prepared for irrelevant details such as what Ceony cooks for nearly every meal, how she fixes her hair, what she times about Emery… over and over again. The magic system is fun and the details about folding the paper and creating the spells were very creative.

These books are mostly clean, no cussing, substance abuse, or sex scene. It is a bit gory since the villains use blood and human parts for their magic. There is a lot of sexual tension at the beginning of the third book, but nothing actually happens. I recommend this to older teenage girls. I don’t mean to be sexist, but I would be very surprised to hear that any man enjoyed these books. It is extremely domestic and sweetly romantic in a pink barbie playset sort of way.

Join 1,718 other followers
Processing…
Success! You're on the list.
Whoops! There was an error and we couldn't process your subscription. Please reload the page and try again.